Brok, the Marine Brawler is an Aqua Sentinel from Hydor. Originally one of the greatest warriors on Hydor, Brok was near death, when the Darkspore attacked. Genetically enhanced by Crogenitor Aqidran, Brok now uses his powers over moisture and water pressure to combat the Darkspore mutation.

Summer 2011, after both Sharps and Sarima were created. Abilities and details were created in late September of the same year.

Brok's weapons are the Aqua-Gauntlets on his forearms.

Hydor, though low on inhabitants on land, was rich in life, that dwelled in its giant oceans. Most of Hydorian species sought peace and harmony with other living beings. And then there those like Brok.

Aggressive and filled with pride, Brok, and ones like him, traversed Hydor from the highest peaks to its deepest trenches in search of a worthy opponent. Brok wouldn't stop, until a courageous (or foolish) daredevil would step out of the crowd and challenge him. The result of the ensuing fights made the challengers remember to not step out next time. Brok seemed invincible, that is until he stumbled upon a laboratory hidden inside the dreaded Uretox Abyss.

Inside, he found a being clad in armor and mask. Brok shouted his challenging speech, yet the creature barely looked at him and completely ignored him. Angered, he rushed at the arrogant being. That was the worst mistake Brok had made. The being disarmed and grounded him in a matter of seconds, knocking Brok unconcious.

When the fighter awoke, he found the being standing by his side. The creature soon introduced itself as Crogenitor Aqidran and said, that he was watching Brok for some time. Aqidran offered Brok a chance to excel at his fighting techniques and learn to control his new powers. Brok accepted.

For a few months, Brok learned how to utilize his abilities to slow down and crush his enemies with his power over moisture. He also learned, that whenever he was in a liquid of any sort, his skin would absorb nutrients and energy, healing and recharging him. Aqidran also taught him his own fighting maneuvers.

One day, when Brok was on his way back to the open water, he heard a loud splash. He watched as a strange ball-shaped meteorite descended towards one of the trenches. He went in to investigate.

On the bottom of the trench, he discovered, that the meteor was actually an alighting vessel utilized to deploy smaller ball-like machines, that kept oozing some weird black smoke. Worried, he locked down the perimeter, as the smoke level was rising higher and higher. After he secured the region, Brok departed to search for other bombing vessels.

He soon found many other vessels similar to the one, that crashed in the trench. What was worse was that the ocean currents took the ball-like smokers and transported them throughout Hydor. He also realized, that the smoke was a toxic, mutagenic substance, that affected every being, that touched it. Terrified for the first time in his life, Brok fled the oceans. When he surfaced, he discovered, that the Mutation Mines landed also on land. He wanted to fight the infestation, but he quickly realized, that it would be a suicide mission. So, he ultimately fled from Hydor in a hijacked starship, vowing to fight the Darkspore until there were none left, should the circumstances be on his side.

Thus, Brok travelled from planet to planet, killing any and all Darkspore on sight, eventually gaining his title: the Marine Brawler.

Brok is a humanoid huchback with massive arms and a muscular torso. A spike emerges from his lower jaw. His weapons are gauntlets mounted on his forearms. Brok has hree spikes on his back.

Pounds the target, dealing 6-10 physical damage with a 10% chance of supercharging the slam with highly pressured water, dealing additional 5-7 energy damage. If Brok attacks two times in succession, the next hit will be a groundslam, that deals 9-14 physical damage and knocking all enemies in a 2m radius back 4 meters.

Creates a field of concentrated moisture in a 10m radius, that slows all enemies, that enter it by 75%. The field exists for 10 seconds. This Ability also amplifies the damage of Pressure Overload by 30%.

Note: The damage is only increased, if Pressure Overload was placed inside the radius of Moisture Attack.

Makes the moist pressure in a 10m area rise to a lethal level. Any enemy inside the area takes 7 / 6 / 7 / 7 energy damage per second for 8 seconds.

Brok draws nutrients and energy from any liquid he touches. Therefore, whenever Brok steps on a liquid, he heals 3-5 health per second and reclaims 0.5% of his power supply per second.

Brok heals now 10-15 health per second and reclaims 2% of his power reserves per second, whenever stepping upon a liquid.

Creates a burst of water in a 6m radius, that deals 15-22 Energy Damage to all enemies caught by the pulse and stunning them for 3 seconds.

Cleanses all negative status effects from heroes and allies in an 8m radius, as well as healing 33 health.

Summons a tidal wave going in a spread cone, that widens to 12 meters. Enemies hit by the wave take 20-26 Energy Damage and are knocked back 5 meters.

Produces a high-pressure stream of water, that will jump from the target to 4 nearby enemies. The first target is dealt 30-46 Energy Damage, but the damage output decreases with 10% of the original damage after each jump. Affected enemies have a 75% chance to be stunned for 6 seconds. 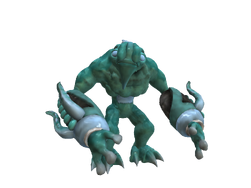 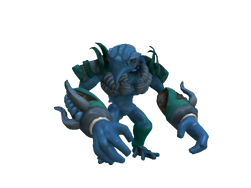 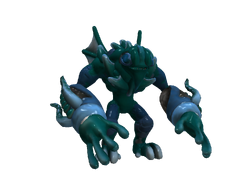 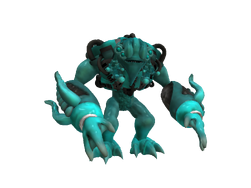 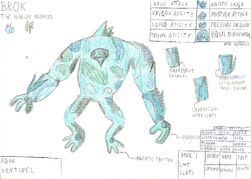 Early Concept
Add a photo to this gallery

Retrieved from "https://dsff.fandom.com/wiki/Brok,_the_Marine_Brawler?oldid=16241"
Community content is available under CC-BY-SA unless otherwise noted.